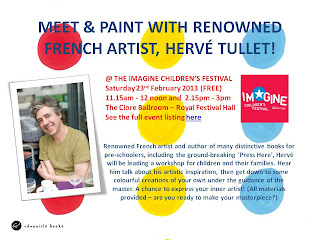 It's at times like this that I wish I still lived in London...

Hervé Tullet is the creator of two of our absolute favourite books - the books we buy for all new babies - Press Here and The Game of Light - and I would have loved to take my boys to this event.

If you're lucky enough to be in London, don't miss it! (And perhaps he'll come up north in the future.)
Posted by Keris Stainton at 08:20 11 comments: 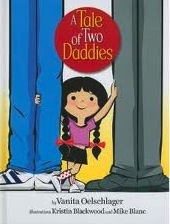 I downloaded these books from NetGalley because I'm always looking for books featuring "alternative lifestyles" (for want of an alternative phrase) and the illustrations looked particularly cute. I'm featuring the two books together because they're pretty similar.

A Tale of Two Daddies starts with a little boy asking a little girl about her two dads. She tells him that she has a Poppa and a Daddy and he goes on to ask her which of her dads does certain things for her.

"Poppa's the one when I need braids. Daddy is there when I'm afraid."

The book continues in this vein. Sometimes the answer is both daddies and sometimes the little girl can do things herself. I particularly like the ending: "Who is your dad when you're sad and need some love?" "Both, of course." 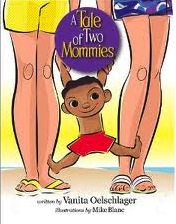 A Tale of Two Mommies begins with the question: "If you have a momma and a mommy, who fixes things when they break?" which immediately made me indignant, but I imagine it's pretty true to life, since gender roles are so ingrained in society and I appreciate that both of these books challenge that (for example, one of the daddies bakes, one of the mommies takes the little boy fishing).

The weakness of these books is that they're more about introducing the issue of same sex parents and less about a readable text. Some of the rhymes are a bit laboured, some don't scan so well and the ending of A Tale of Two Mommies is a bit sudden and unsatisfying, but this is actually more than made up for by the glorious illustrations. There's an explanation of how they were made in the back of each book and they're just beautiful. There's more than one that I'd like framed. This one may be my favourite, but it's hard to choose: 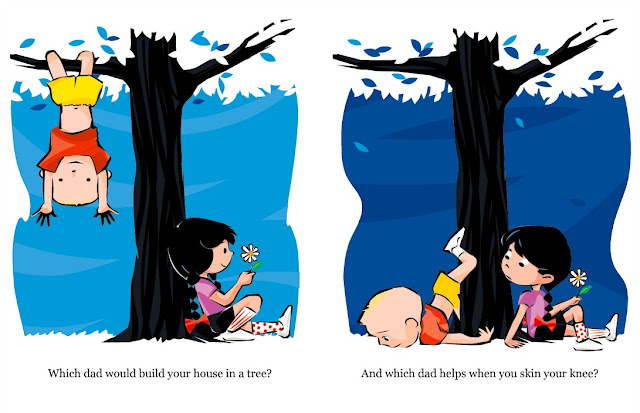 Niggles aside, these books are a charming and simple introduction to the idea of same sex parents for younger children.
Posted by Keris Stainton at 11:07 1 comment:

Email ThisBlogThis!Share to TwitterShare to FacebookShare to Pinterest
Labels: A Tale of Two Daddies, A Tale of Two Mommies, Vanita Oelschlager

Whatever by William Bee 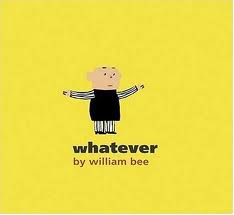 I picked this one up in the library because of the bright cover and then realised that it's basically a modern update of one of my old favourites: Pierre (who only would say "I don't care!") by Maurice Sendak.

No matter what Billy's dad shows him, Billy's only response is "...whatever." Something very tall, something very small, the world's bounciest castle, or steamiest train - "...whatever." Even a trip in a rocket to the edge of outer space fails to impress Billy.

And then his dad shows him the world's hungriest tiger... with inevitable (and Pierre-esque) results. The ending of Whatever is darker than that of Pierre and it made my children laugh, whereas they seem unconvinced by Pierre - for whom being eaten by a lion teaches him that he does indeed care. (Even I find myself thinking "Yeah, Pierre. But for how long?")
Posted by Keris Stainton at 11:18 1 comment:

Email ThisBlogThis!Share to TwitterShare to FacebookShare to Pinterest
Labels: Whatever, William Bee

It's Not Fair by Amy Krouse Rosenthal 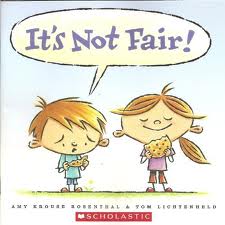 We bought an iPad. I've quite fancied one since they came out, but the real Apple fanboy in the family - almost-8-year-old Harry - has been desperate for one. So we finally bought one and Harry described it as a "dream come true."

I love Rosenthal's books - particularly Yes Day, which is also illustrated (beautifully) by Tom Lichtenheld (who, I just realised, also wrote and illustrated the wonderful E-mergency!) - and It's Not Fair is another treat, written in rhyme (which doesn't always work without an American accent!), children and more complain about how life isn't fair. You know, like children do ALL THE TIME.

But the most successful part of this book was the following:

Since I was reading it to 3-year-old Joe, who is indeed suffering from chicken pox. He was so excited to see it in the book, it was hilarious. (The book also features a 'Complaint at Law in the Circuit Court of Fairness' that I'm sure many parents will appreciate.)

One thing I will say is that after spending the day playing with book apps, a plain old book seemed a bit, you know, limited. This is, I know, ridiculous, since I've been reading books for 40 years and, at the time of reading It's Not Fair, had had the iPad for about four hours, and yet I found myself tapping the picture and expecting it to do something. Sigh. You can, however, zoom in, which was great for looking at the chicken pox up close and is also good for isolating particular words or parts of pictures.
Posted by Keris Stainton at 13:53 2 comments: 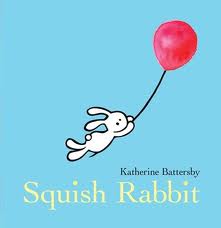 I read Squish Rabbit via We Give Books, a fantastic site created by the Penguin Group and the Pearson Foundation that donates to selected charities for each book read online.

I was attracted by the cute, uncluttered cover and the book is equally cute and uncluttered. It's the story of a little rabbit named Squish because he's so little he keeps getting, well, squished. He's also so little that people don't notice him, so he's lonely too. Eventually, of course, Squish finds a friend and the illustrations of them meeting each other are really adorable. In fact, every page is adorable. I love it when illustrators manage to convey emotion in such simple characters.

I also love that Squish makes himself a friend and also, at one point, has a tantrum - I'm sure many children will identify. It would be a great book for a child who is struggling to make friends - perhaps one who has just started at nursery or preschool.

Squish Rabbit is a really sweet book that I'm pleased to have discovered. I'll definitely check out the 'real' version one day too. I suspect the illustrations are even more lovely in 'real life'.
Posted by Keris Stainton at 18:09 No comments: 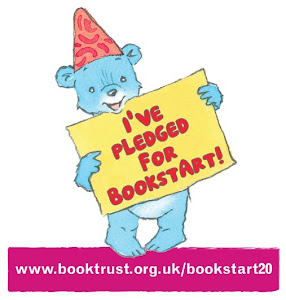